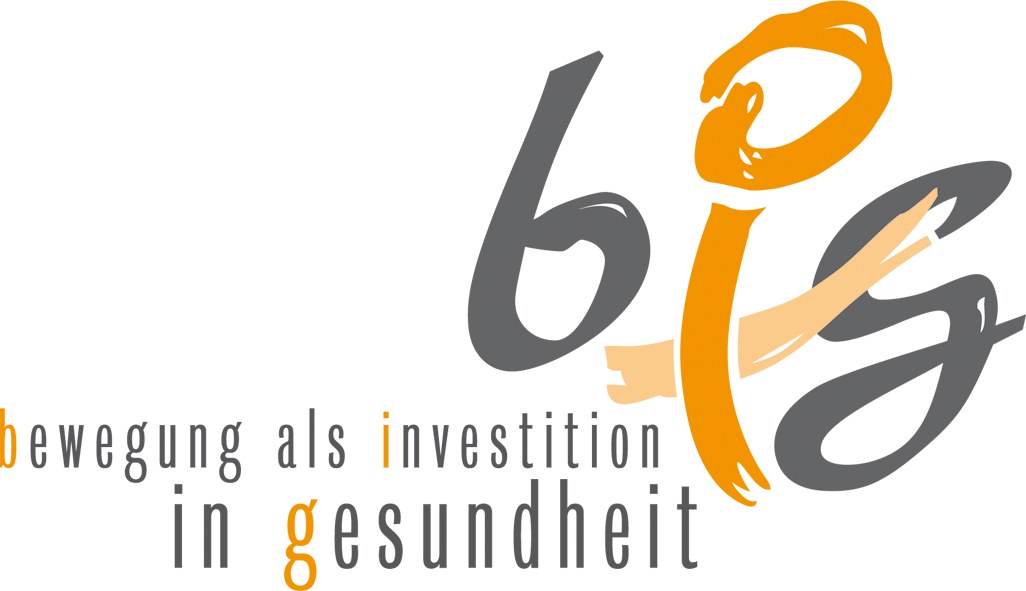 Physical activity has many positive effects on health: prevention of cardiovascular disease, diabetes and cancer, prevention of high blood pressure and obesity, alleviation of symptoms (e.g. back pain), improvement of physical and mental well-being, development of self-confidence and social support – to name just a few of the numerous health-promoting effects of exercise

However, the chances of being able to profit from this positive effect are unequally distributed. Access to exercise is often difficult, especially for women in difficult life situations. Women in difficult life situations are e.g. single parents or unemployed, have a low household income or suffer difficulties due to their migration background. Various barriers, such as lack of childcare opportunities, lack of financial resources, language difficulties or cultural characteristics prevent women from participating in existing exercise offers.

Through BIG (”Physical activity as an Investment in Health”), these women are enabled to plan and implement low-threshold physical activity programmes. They are supported by a BIG network consisting of local actors such as municipal decision-makers, practice partners and multipliers. The aim of BIG is to facilitate access to exercise for women in difficult life situations, to strengthen women’s control over their own health and to expand local health promotion structures for the target group.

The approach was developed in 2005 at the Friedrich-Alexander University of Erlangen-Nuremberg and transferred and tested in practice within the framework of model projects.

TThere is well-defined scientific evidence for the benefits of physical activity, but the notion of physical activity itself has been rather neglected in light of this evidence.  In the last decade physical activity has shifted in definition from primary sports medicine and training-oriented paradigms – that focus mainly on endurance and strength training – to more complex and complete paradigms such as the concept of health enhancing activity (HEPA).  Due to this shift, movement-promoting life styles like walking and cycling began to be considered as having a positive impact on health outcomes.  Within the context of the new, broader paradigm, however, the physiological perspective continues to dominate as the import of measurements of caloric expenditure show.  The BIG project investigates movement by including the non-physiological characteristics of physical activity in its definition, and thus incorporates the WHO developed concept for health promotion: Investment in Health.  These additional characteristics include considering possible correlations between movement and education, social participation and social support on an individual level and the creation of healthy lifestyles and policies for health promotion on a community level.  These additional characterizations agree strongly with the WHO concept, and expand the notion of physical activity in an important way to improve the understanding of the positive health outcomes associated with movement found in scientific literature.

Health promotion can be considered from a deficit-oriented point of view, or from an asset-oriented, salutogenic perspective.  The former point of view is most often used in public health interventions, especially those focusing on socially disadvantaged target groups: it concentrates on the influence of health-relevant problems and needs.  Deficit oriented approaches to health promotion run the risk of ignoring possible assets for health, however – assets that could potentially be useful in health promotion interventions.

The WHO has recently developed an “Assets for Health and Development program” in conjunction with various Public-Health organizations based on this theoretical background.  The main focus of the program is to define assets for health and to use them for health promotion.  Health Assets are defined in this context as “…any factor (or resource) which enhances the ability of individuals, communities and populations to maintain and sustain health and well-being.  These assets can operate at the level of the individual, family or community as protective (and/or promoting) factors to buffer against life’s stresses.”

The BIG project has been realized in scientific cooperation with the WHO?s Venice office. This cooperation enabled the BIG project partners to directly influence the development of the health assets approach. BIG is one of the first studies investigating this theory worldwide and will become known, among other things, as the first WHO published work on this topic.

Although in the 1986 WHO Ottawa Charter the development of more whole and complete policies conducive to health is specified and required, in practice, health promotion remains primarily in the jurisdiction of the health sector.  Deciding the determinants of health and health promotion, for instance in the social, economic, or infrastructural domains, is no easy task.  Thus, innovative approaches are necessary, approaches which show where health promotion should be positioned on the policy agenda.

In spite of these brief investigations into the meaning of policy topics, health science research does not often delve into policy analysis and development.  In particular, there is a lack of hard data about policy structures relevant to health and options outside of the health sector.  The BIG project, in an attempt to fill this lacuna, has systematically examined all relevant policy fields on the national, regional, and community levels in order to see what insight they could offer in health and movement promotion.  In addition, BIG has applied one of the few theoretical attempts in the area of health-science policy analysis, a theory already tested empirically in a successful international comparative study.

In response to this need in health promotion research, BIG has developed and performed a series of interventions which include comprehensive participation – with very positive results.  More specifically, in BIG, the women in the target groups were actively involved in creating the project and working on it.  As a result of this novel approach, important new developments concerning participation as a new possible determinant in health promotion occurred, within portions of the population who were difficult to reach and involve in Movement as an Investment for Health programs.

Actions taken to improve health outcomes have behavioral effects as well as relational effects, the two types of effects not necessarily being mutually exclusive.  In this way, an appealing and safe movement environment can encourage individuals to engage in movement activities.  The opposite is also true: movement activities can add to the appeal and surety of the movement environment.

Similarly, politically initiated communal actions, for example cooperative planning and adaptation of movement programs for and with women in difficult life situations, can both promote the ability of these women to gain better control over their lives and improve the situation in the community through the work of these women.

Concrete interventions have been developed in the BIG project, promoting movement – and thus improved health outcomes – among women in difficult life situations using a cooperative planning process that includes the women of the target groups themselves, experts, and other stakeholders such as policy makers.  These activities involve multidimensional interventions developed along the way to respond to the needs of the participants in the planning process.  The following are examples of these interventions: having two different movement programs which deal primarily with impact on health, on health behavior and social impact; the development of swimming hours exclusively for women, and the creation of access to varied sports facilities for women which encouraged greater movement behavior; educating women as sports instructors, which developed individual skills and competences among women in the target groups; and establishing BIG project offices in which women of the target group were also involved, working in supportive organizational capacities, a procedure which strengthened existing institutional structures and will contribute to the sustainability of BIG.

Evidence-based case studies have been a matter of discussion in health promotion for some time now.  An important aspect of this subject is whether case study evaluation should be approached from the evidence-based medical paradigm, with priority given to randomized control trials (RCT), or if health promotion should be evaluated from an entirely different paradigm given the special nature of the phenomena examined in this field.  The import of these questions is shown in that the WHO has also recently begun investigating integrated evaluation theories.  The seminal point in integrated evaluation is linking basic health promotion evaluation perspectives with medical and economic evaluation theories to come up with a new and more complete method of evaluation.

The BIG project attempts to address these needs in health promotion evaluation procedures by bringing together methods of evaluation and paradigms from health promotion, sports medicine, and health economy fields to create a new, comprehensive evaluation design.  Evaluation in this context refers to the whole process of project development and project conversion (that is, considering the participation of the target group),  as well as to the specific measures outlined in the multidimensional intervention section.  The outcome of this comprehensive evaluation paradigm is a method of analysis which measures physiological and psychological health parameters in addition to changes in health behavior, social and political organizational effects, and socio-economic variables related to health.

Many well-respected projects in the health promotion field have had impressive initial results, but have failed to generate long term effects.  Outcomes fail to improve in the long-term because activities initiated by the project do not out last the conveyor period, which is activities cease once the project has finished.

The BIG project has paid special attention to long-term effects, or sustainability, in all project phases: an essential reason for which policy options were investigated in phase one of the project was to determine which policies could be used to contribute to sustainability, otherwise put, how policy could be used to extend the effects of the project beyond the conveyor phase.  Participation of women and other stakeholders in phase two was also implemented in the project design for sustainability, since participant ownership contributes to the long-term success of a project.  This latter development was strengthened in phase three, where project control was taken over by the cooperative planning groups.  In addition, sustainability was encouraged in phase three through a series of organizational structure measures, for example the establishment of BIG project offices.  And in the continuing fourth phase, the long-term effects of the BIG project are being promoted by the creation of workshops concerning the project.